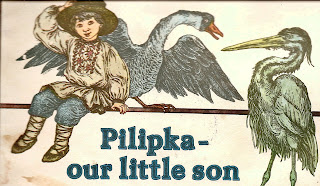 PILIPKA OUR LITTLE SON is a Byelorussian folk tale. The gist of the story is that there used to live a couple who did not have any child. One day the man went into the woods & from there he brought for his wife a log. The man asked his lady to take care of the wooden log as her own baby. The wife placed the log in a cradle & sung lullaby but after 3 days only the couple was surprised to see a baby boy in the cradle instead of the log. The couple lovingly named the boy PILIPKA.

Both the parents used to love Pilipka from their bottom of heart & used to fulfill all his wishes , one day Pilipka asked his father for a boat & a oar in order to catch fish in the near by pond. His father bought the boat & oar. Pilipka used to do fishing throughout the day without bothering to have even his lunch. So his dear mother used to carry his food on the pond & there she used to call Pilipka & ask him to eat his food.

One day a wicked witch named BABA YAGA who lived in the same jungle, heard Pilipka's mother & she even saw Pilipka. The witch immediately planned to kidnap Pilipka . Next day she went on the pond & she called Pilipka like his mother used to. Pilipka thought that his mother had come with his meals so he rushed to the shore & the witch caught the innocent boy. She sacked her & took with her. On her way to home the wicked woman felt sleepy & she slept. Taking the advantage of the situation Pilipka came out of the sack & filled the sack with stones.

When the wicked witch woke up she again lifted the sack & went home but to her shock she saw stones when she opened the sack at her residence. This made the witch angrier. The next day the witch again went to the pond & again called Pilipka like his mother but this time smart Pilipka did not get trapped as he knew that the voice was of the witch & not his mother. Pilipka said that his mother’s voice is very soothing. On hearing this , the witch went to a black smith & asked him to hammer her tongue so that it will be very thin & she can speak like Pilipka's mother.

The witch after visiting the black smith again went on the pond & called Pilipka. This time Pilipka thought his mother had arrived with the food, so he rushed to the shores & eventually Baba Yaga trapped him once again. The witch sacked him & took Pilipka to her house. There the wicked woman asked her wicked daughter to roast Pilipka in the stove & Baba Yaga left from her house for some work.

The witch came to home & her mouth started watering .She removed the roasted body & started consuming. She did not realize that she was enjoying the meat of her own daughter. However Pilipka shouted from the tree that the wicked lady is eating her daughter's flesh. On hearing this Baba Yaga was red with anger. She ran out & tried to cut the tree on which Pilipka was hiding with her teeth but the wicked broke her teeth.

The cruel lady than ran to the black smith & asked for an axe , he gave her an axe .Baba Yaga came back & struck the tree trunk with the axe. However Pilipka saw some geese flying in the sky he asked the for their help & with the help of the Geese Pilipka flew to back to his home but the wicked lady kept on cutting the tree trunk & eventually the tree fell on her & she died underneath the big tree.